Safari in the San Juans

Photos From Your Tour

Welcome to the Wild West of whale watching in Washington.

Port Angeles is a premier whale watching destination located just outside the popular Olympic National Park. In recent years, the surrounding waters have become one of the leading destinations for viewing humpback whales in North America. Both mammal-eating and salmon-eating orcas are often seen in the area as well. 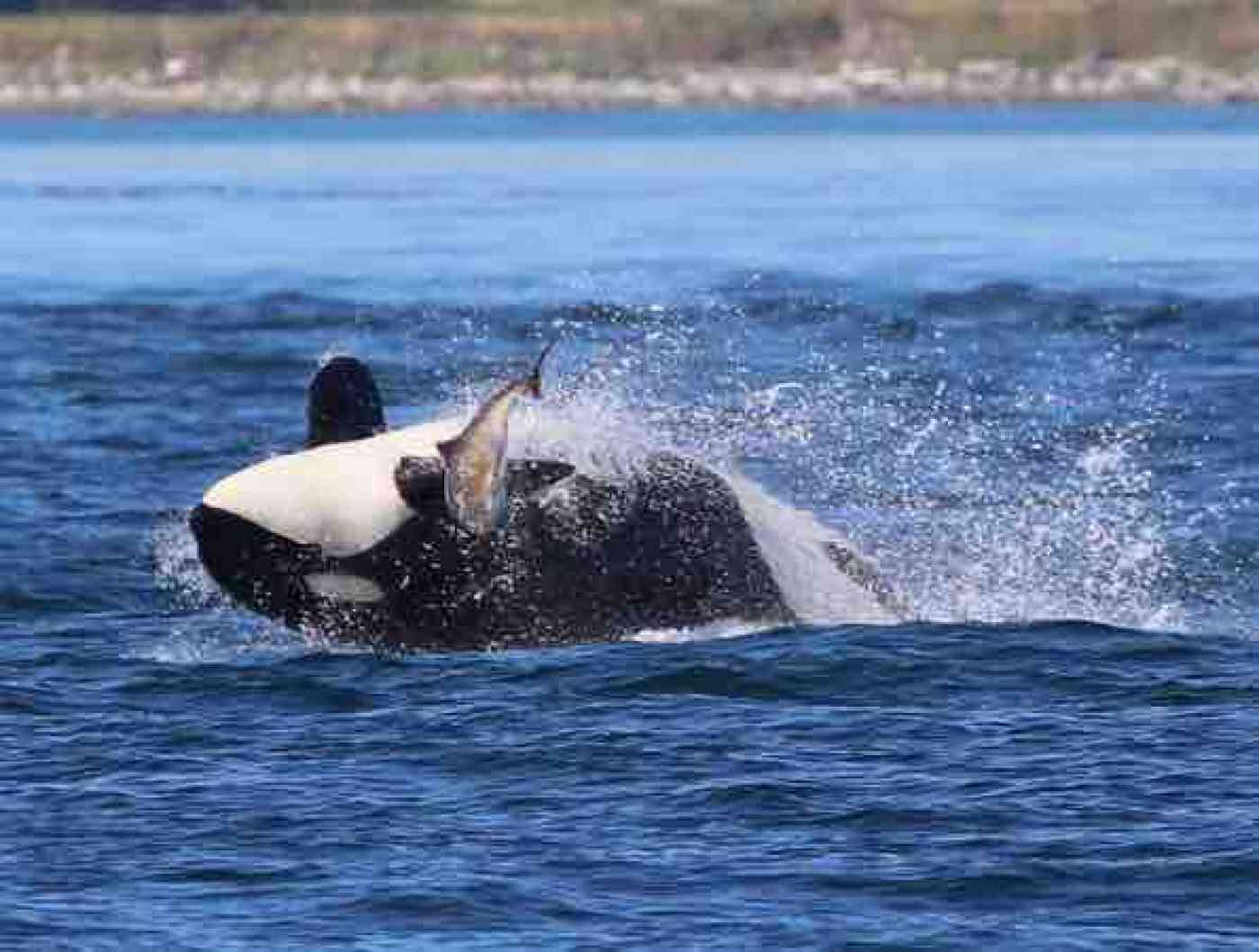 The Strait of Juan de Fuca has been home of the famed "Humpback Comeback" of the Pacific Northwest, with hundreds of humpbacks now choosing these cold, nutrient-rich waters as their summer feeding grounds.  After facing extinction in the early 1900's,  protective measures have since helped humpback whale populations rebound. Despite their size (40 feet long and weighing 40 tons), humpback whales have the reputation of being the most acrobatic of the whales.  Few things compare to seeing a trademark humpback breach!

From Port Angeles, our tours can head west into the Strait of Juan de Fuca, east toward the San Juan Islands, or north toward Race Rocks Ecological Preserve - no passport required!  We visit Race Rocks more than any other company in Washington, marveling at elephant seals, Steller sea lions, and if you're lucky, maybe even a sea otter!  The variety of wildlife seen on our Port Angeles tour is second to none. 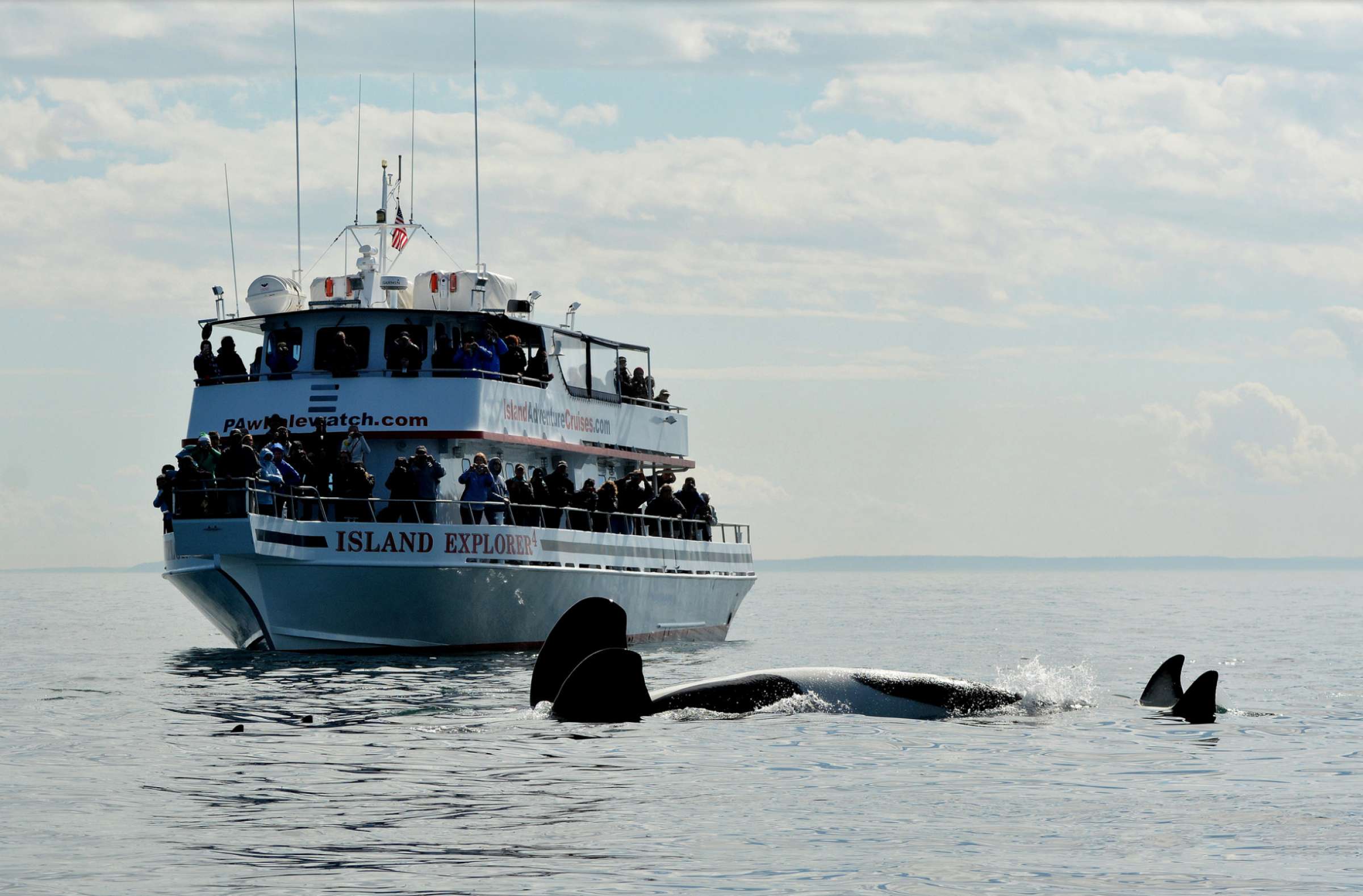 A premier whale watching destination located just outside the famed Olympic National Park.  In recent years, the waters surrounding Port Angeles have become one of the leading destinations for viewing humpback whales in North America. Orcas are often seen feeding in the area as well. From Port Angeles, the comfortable Island Explorer 4 can head west into the Strait of Juan de Fuca, east toward the San Juan Islands, or north toward Race Rocks Ecological Preserve - no passport required! Best location for guests coming from Tacoma and the Olympic Peninsula!

There's no better way to start your day than with a memorable whale watching encounter!  Our 9:00 AM and 2 PM departures will highlight the wildlife and scenery of the Strait of Juan de Fuca.  Don't miss out on the #1 whale watching tour in the Pacific Northwest!

We can confidently say that there isn't a tour time that's better for whale sightings than the other. There are subtle differences between both tours, making them both world-class.

We recommend choosing the departure time that works best in your schedule as both tours have the same whale sighting success rate. The benefits of morning versus afternoon come into play on the human side! Morning tours are great because you're first out on the water and have the rest of the afternoon to do as you please. The afternoon tour is great because you don't have to get up early, and you end your day with whales and some pretty incredible lighting for photographs.

All tours are great, so choose the one that works in your schedule best!

Our summer 9:00 AM departure allows us to maximize our encounters with whales and still return to the dock with plenty of time to explore the gems of the Olympic Peninsula before heading on to your next adventure. Don't miss out on the #1 whale watching tour in the Pacific Northwest!

Our 2:00 PM departure from Port Angeles is ideal for those that want a more leisurely start to their day without sacrificing any of the wildlife action. The lighting tends to soften throughout the day making our afternoon tour ideal for nature photographers!

There's no better way to start your day than with a memorable whale watching encounter!  Our 10:30 AM departures will highlight the wildlife and scenery of the Strait of Juan de Fuca.  Don't miss out on the #1 whale watching tour in the Pacific Northwest!

Big savings for booking in advance!

Adults save $20 when you book 30+ days in advance and an additional $10 with military ID, AAA, AARP, seniors 65+, or college student ID. This deal cannot be combined with promotion codes or other discounts and is valid on whale watching tours only.

Our interactive map showcases all of our 2019 whale sightings.  Island Adventures saw whales on 167 of 172 tours out of Port Angeles in 2019!  Each pin represents a whale sighting:

It was the year of the humpback from Port Angeles in 2019!  There has been a resurgence of humpback whales in the waters off of Port Angeles, with groups of 80+ whales hanging out in the Strait of Juan de Fuca.  Port Angeles tours also often see Bigg's killer whales and minke whales!

What Vessel Will I Be On?

The Island Explorer 4 is 85' long, 22' wide with many of the same great features: large heated cabin, full walk-around lower deck, and huge upper viewing deck. Island Explorer 4 is the favorite boat for many of our guests; she is quick, very maneuverable, and can go places that other larger vessels cannot.  Experience the unplugged version of the San Juan Islands aboard the spacious Island Explorer 4!

Select souvenirs (hats, jackets, mugs, gloves, t-shirts, etc) are available for sale onboard, but because of their availability some items may not be in stock. Don't forget to check out our gift shop!

For our Whale Watch tours from Port Angeles, please check-in at the Landing Mall ramp ½ hour prior to departure. A crew member will come to the top of the ramp to check you in and guide you to the boat. It is imperative for you to be on time, the boat will leave the dock promptly at the scheduled departure time. Get directions to our Port Angeles departure location.

Port Angeles sees considerably less rain than other areas in Western WA.  In the summer months, the temperature averages between 60 and 80 degrees fahrenheit.  Even though the weather can feel warm on land, we always recommend bringing layers – sweatshirts and jackets – as it feels 10-20 degrees cooler on the water.  Rain doesn't have a negative impact on our tours as our excursion vessels are set up to go out in the elements and have lots of indoor space and cover.

Make a reservation online with our secure system and receive an immediate email confirmation.

See what we've seen on the water. There's a detailed account from every tour since 2003!

Prepare for your tour

It’s better to be over-prepared than under-prepared.  See our tips, suggestions, and frequently asked questions.

Port Angeles offers some of the Northwest's best wildlife, and there outlets to learn more about the area's diverse population.  Swing by the Feiro Marine Life Center to learn about nearly everything living underwater, all collected within 20 miles of Port Angeles from the Strait of Juan de Fuca.  Pop into the NOAA Olympic Coast Discovery Center for information about where to experience shore-based wildlife viewing after your tour! 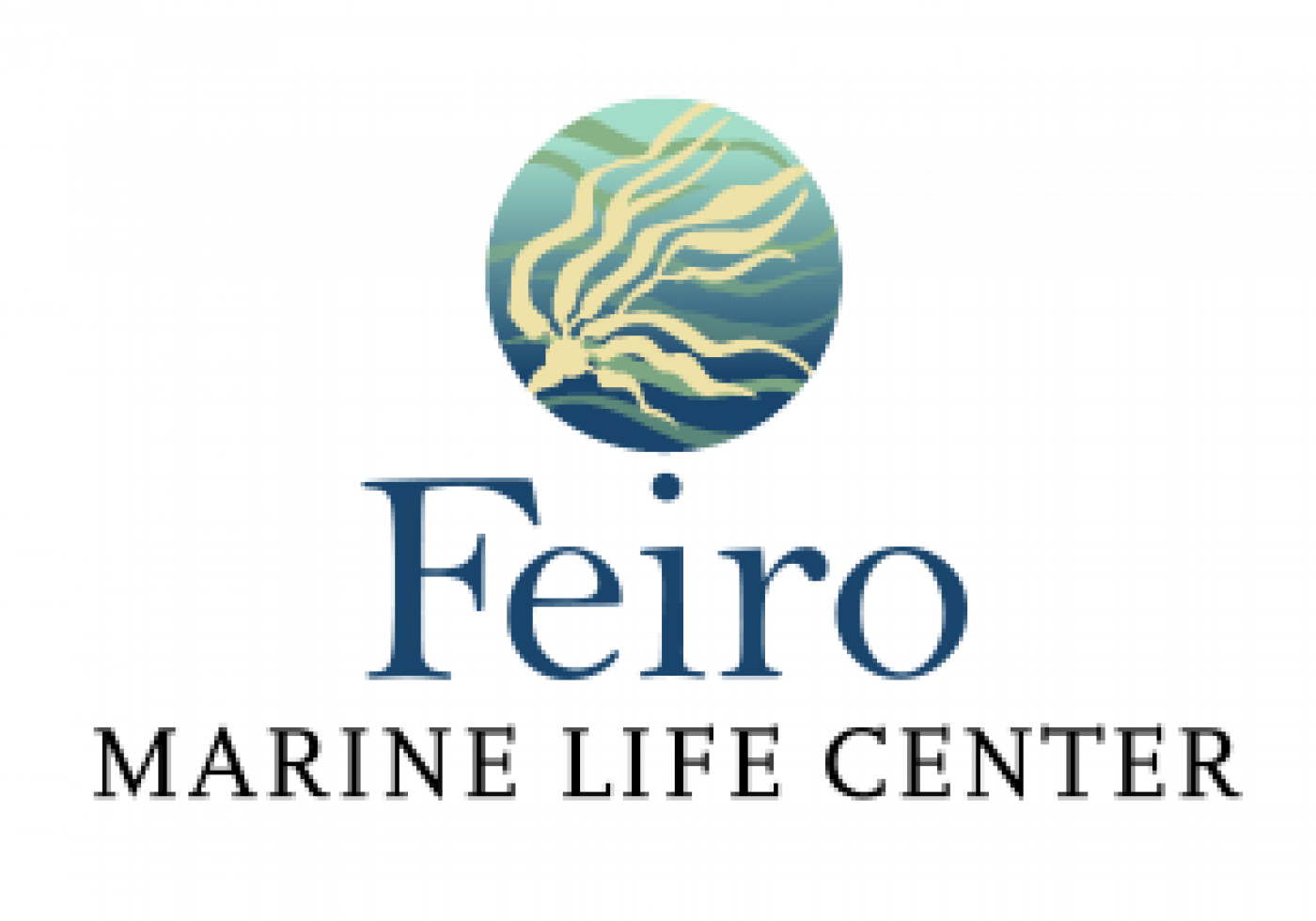 Get a hands-on view at the microscope station and check out some of the area’s natural history through displays of whale bones and shells, sculptures and murals, and three touch tanks.

The Marine Life Center is a fun, safe and easy way for people of all ages and physical abilities to experience the marine waters of the North Olympic Peninsula. 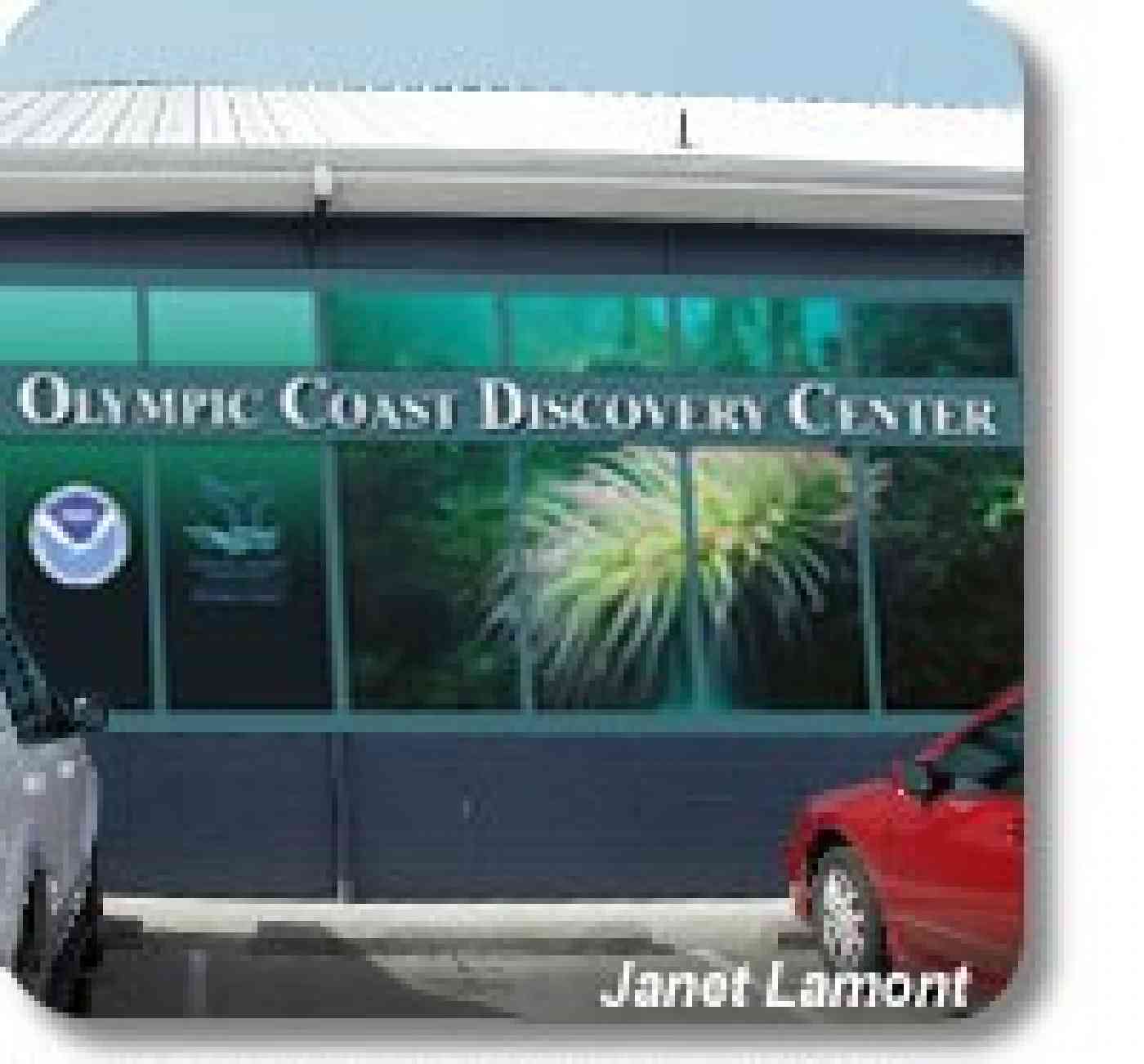 Olympic Coast National Marine Sanctuary has a total area of 3,188 square miles - it's kind of hard to miss. But your first stop should be The Olympic Coast Discovery Center, on the Port Angeles waterfront. It's a great place to begin your learning adventures on the Olympic Coast.