See up to 5 Types of Whales from 3 Departure Locations!

Icons of the Pacific Northwest

Killer whales, or orcas, are one of the most recognizable and beloved marine species on the planet. They hold a special cultural significance in the Pacific Northwest and we are fortunate to share our local waters with more than one type of killer whale. 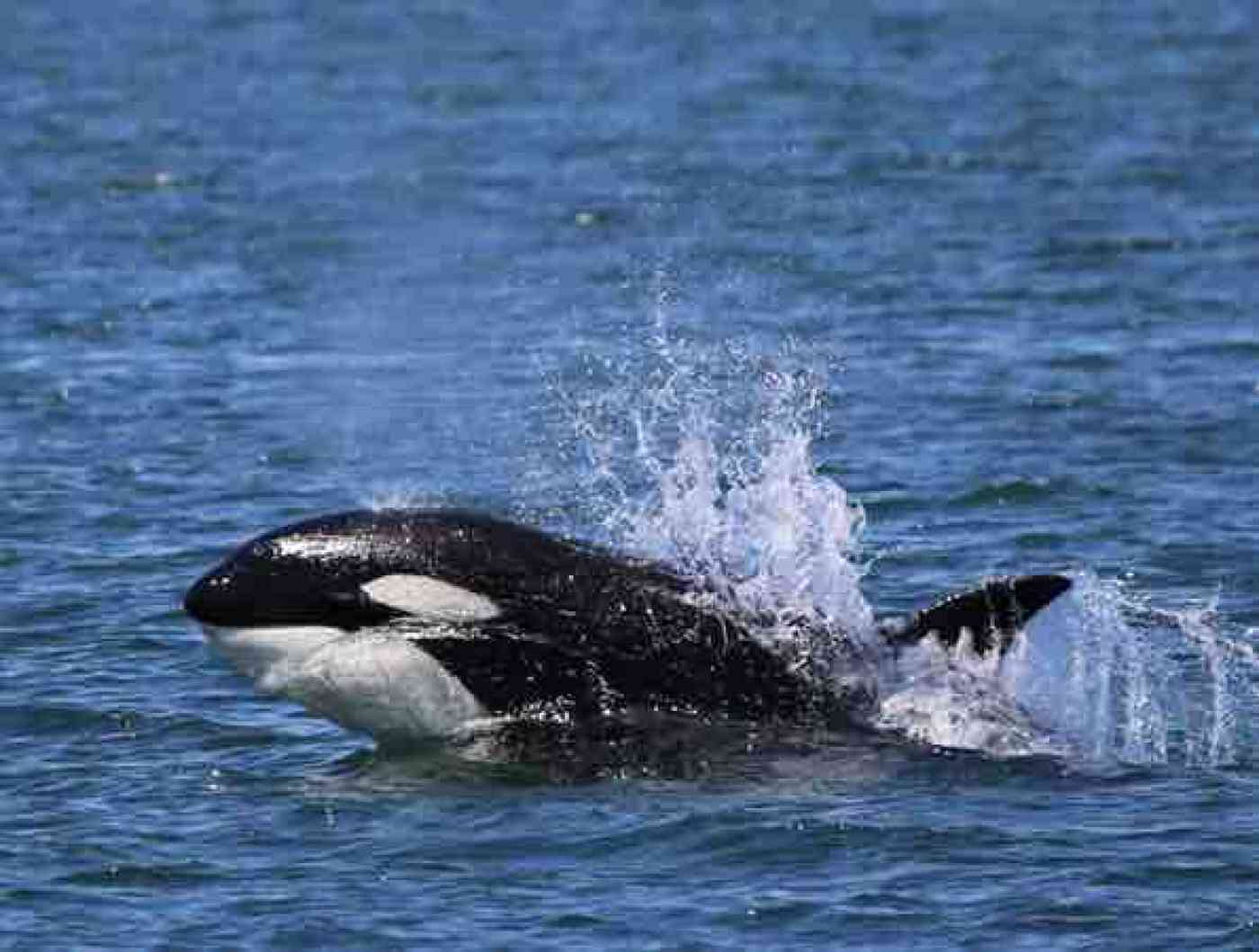 Once referred to as transient killer whales because they were rarely seen, Bigg's, or mammal-eating, killer whales are becoming an almost daily sight in the Salish Sea due to an abundance of their favorite foods - seals, sea lions, and porpoises. These stealthy hunters work cooperatively within their family pod to capture prey. Nothing quite compares to speed and power of these apex predators.  An afternoon watching killer whales can become a PG-13 experience with one quick flick of the tail, occasionally sending seals flying 30-40 feet in the air!

While Bigg's killer whales tend to travel with their immediate family groups (4-7 animals), they often join together with other groups to feed, play, and mate.  Speaking of mating, the mammal-eating orcas have sure been busy lately!  Since 2012, nearly 90 new calves have been born leading to a population explosion in the Salish Sea. It's estimated that there are approximately 300-400 Bigg's killer whales that feed in the Salish Sea.

Unlike many of the local whale species, killer whales do not migrate and can be seen at any time of year.  That said, their range extends from central California to Alaska.  They can swim more than 100 miles a day, so you never quite know when and where they'll pop up next! 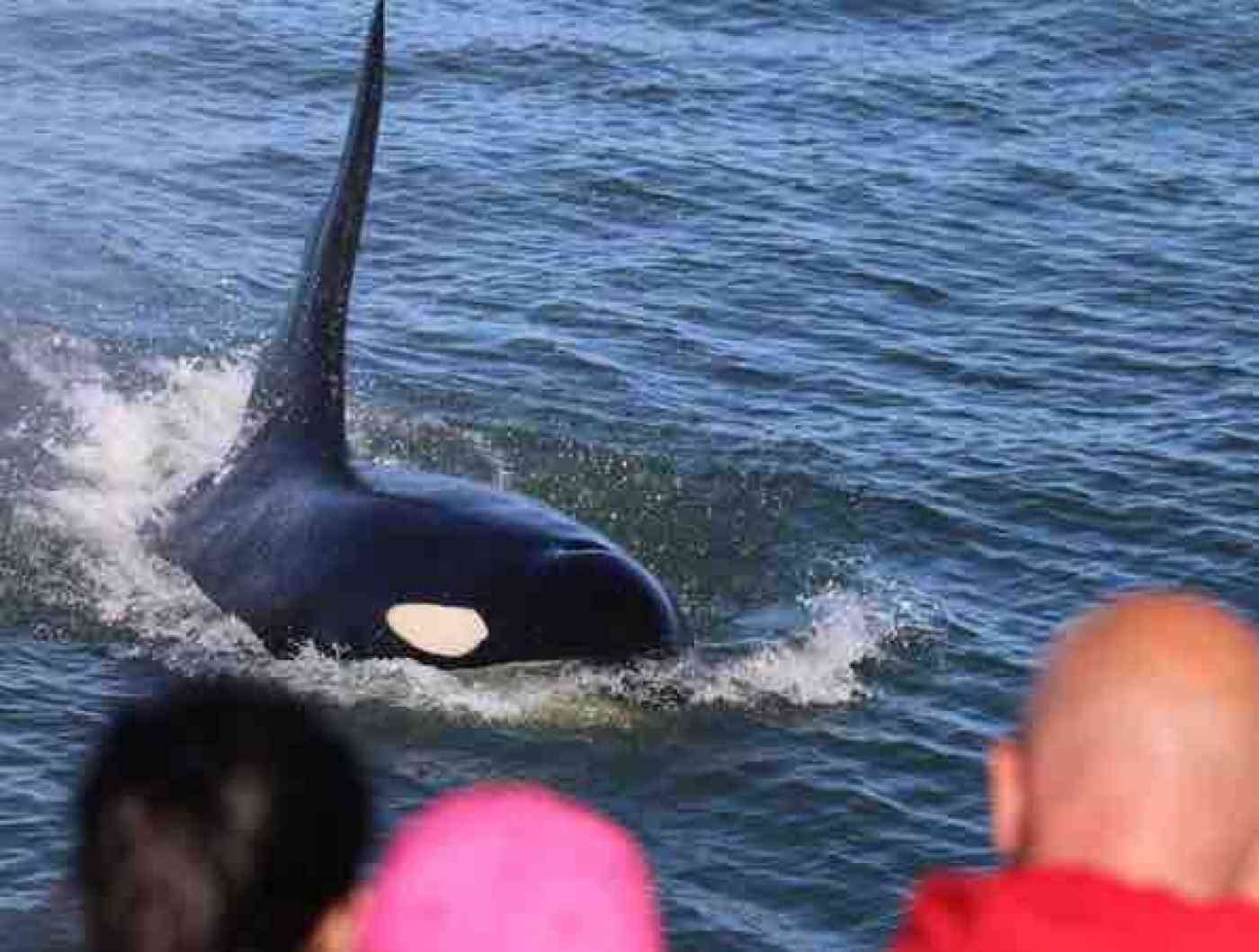 J, K, and L pods make up what is known as the Southern Resident killer whale population.  These killer whales eat different types of fish depending on the time of year.  Their favorite food is Chinook salmon, but their diet has been known to include all five types of salmon, as well as steelhead, halibut and lingcod.

These whales live in very tight-knit family groups which range from the youngest baby to the eldest female.  Immediate family groups (a mother and her offspring) are referred to as a matriline.  Multiple matrilines make up larger pods (J, K, and L pods).  It's like traveling with all your extended family!  Sometimes, all three pods will come together creating a superpod. The older whales are the keepers of the knowledge – from hunting techniques to their highly-complex language – that’s been passed down through generations.

Unlike Bigg's killer whales, Southern Resident killer whales are currently listed as an endangered population.  Populations of their primary food source, Chinook salmon, have declined in recent years, causing them to spend more time outside the Salish Sea where fish is more plentiful.

Every day and experience is completely unique and unpredictable! The beauty of seeing these magnificent orcas in the wild is that they are doing what they want to do when they want to do it. No two encounters are ever the same. Below are just a few of the many behaviors that orcas might exhibit throughout their day.

Breaching is an acrobatic display that seems contagious.  In order to propel their bodies (up to 11 tons) out of the water they have to reach speeds up to 23 mph!  There are many thoughts to why orcas breach.  Along with just being fun, researchers think breaching might help slough dead skin or maybe take care of an itch.  It may also serve as communication through body language or be an effective way to move prey.

A spy hop is just the orcas’ way of checking out what is going on at the surface!  Raising their rostrum up through the water, at times past their pectoral flippers, allows an elevated look at the world above the water.  This is one of the rare times that a whale engages in human watching!

Even orcas need sleep!  When sleeping, members of the pod rest near the surface in one close group.  This is known as logging.  The orcas move as if they are synchronized swimming while taking short, shallow dives.  Because they are cognitive breathers, half of their brain remains awake while the other half sleeps.  This “sleep swimming” activity typically lasts two to six hours and can take place day or night.

How do killer whales find food?

Orcas utilize echolocation, the animal version of sonar. High-frequency, extremely fast clicks are projected from the whale's forehead, or melon, and sent out into their environment. The sound vibrations that bounce back from objects are returned to the lower jaw which is then directed to the inner ear. Depending on the speed and intensity with which these signals return, the whales are able to perceive distance, speed, shape, texture, and composition of objects in their environment. This is important when hunting at night or in deep water where light from the surface does not penetrate.

How do we identify whales?

The early 1970's, Dr. Michael Bigg, a scientist with the Canadian Department of Fisheries and Oceans, began studying the orcas of the region, mainly to determine the population and its dynamics in light of orcas being captured for captivity. He developed a technique using photographs to ID individual whales. Currently, the Center for whale research conducts an annual census of the southern resident orcas. Located just behind the dorsal fin on each side of the whale is a white pigmented area called a saddle patch. The saddle patch is like a fingerprint. Unique encroachments of black and sometime scars within the patch make each one distinctive. Characteristics of the dorsal fin itself – such as scars, nicks and overall shape – are also helpful in identifying individual whales.

Learn more about the area's wildlife and scenery

The waters surrounding our three departure locations offer some of the most diverse whale and wildlife viewing on the west coast. Onboard each of our tours, an experienced naturalist helps identify all of the whales, wildlife, and rich history that this area holds.

Make a reservation online with our secure system and receive an immediate email confirmation.

See what we've seen on the water. There's a detailed account from every tour since 2003!